To create a Multimeshadj object we need to fill several arrays with info to describe how domains abutt. We will construct multimeshmadj object for an 8x8 zone rectangular grid, split into 4 domains (2 in each logical dimension): 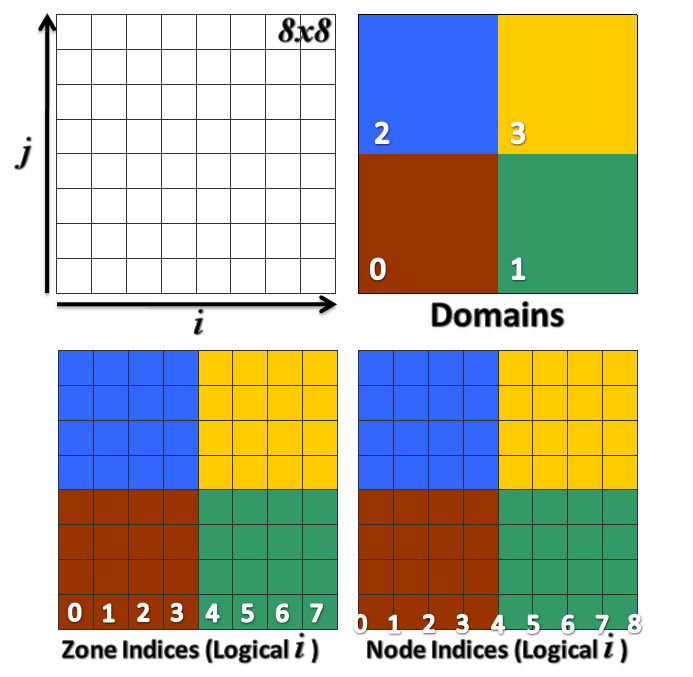 To create the object using DBPutMultimeshadj we need to construct the following arrays:

Our example mesh has a very simple domain neighbor list:

From this we can create the nneighbors, neighbors, back & nnodes arrays:

The node lists are the most difficult component to construct, we need to create a total of 12 - three for each domain. Lets take a close look at the info we need to pack into each list.

For the structured grid case each node list contains 15 integers:

To calculate the overlapping nodes we need to understand the logical blocks of zones and nodes for each domain. 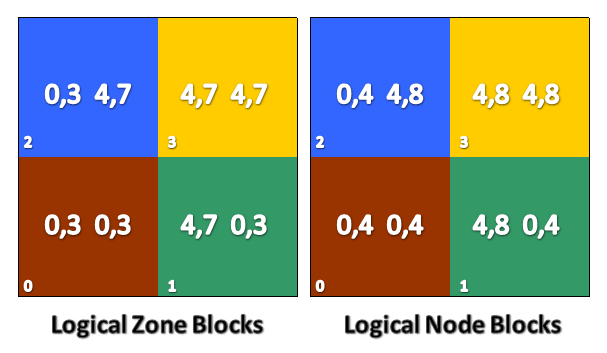 Note that it is easy to obtain the logical block of nodes from corresponding logical block of zones by adding one the upper extent in each dimension. Lets create the first nodelist, which describes the node overlap between domain 0 & 1.

Fill the first six values with the interleaved logical node extents for domain 0:

For the next six we calculate the node overlap between these two domains by noting they overlap in logical j:

The orientation between these two domains is identical so we fill the next three values with:

Re-Design of Nodelist Handoff from Silo plugin to VisIt Proper

The nodelists defined by a block-structured code as described above are interpreted in the Silo plugin and then converted to a node-centered variable that is painted onto the mesh. It is this mesh variable that is handed off (e.g. returned to) VisIt proper from the plugin. The value of the variable at each node is used to indicate each node's membership in various of the nodelists defined in the input database.

In its original design, it was assumed that this node-centered variable needed to behave more or less like a normal scalar mesh variable such as a integer-valued vtkDataArray. For example an integer value at each node could be used as a bit-field to indicate the node's membership in at most 32 nodelists. But, this is too constraining and leads to a very strict upper limit on the total number of nodelists defined in the input database or, at the very least, a strict (as well as difficult to predict) upper limit on the number of coincident nodelists any given node can be a member of. Furthermore, the assumption that the node-centered variable we create needs to be a normal scalar mesh variable is also not necessary.

For each node, a 1 in bit-position i in the node-centered variable indicates the node is a member of nodelist i in the associated enumerated scalar variable. The particular set of nodelists that are on in the current SIL selection would be represented by another bit-field, a selection mask, indicating the on/off state of each corresponding nodelists in the current SIL selection. When the node-centered variable indicating nodelist membership is returned from the plugin to avtGenericDatabase, the selection mask is then applied by a bit-wise and operation to each node's value. The process of applying the selection mask is handled down in the bowels of vtkEnumThreshold with some enhancements to the way its ByBitMask enumeration mode works. Currently, vtkEnumThreshold is coded to assume a 1-component float, int, double kind of data array. We will have to adjust it to handle a many component vtkBitArray for the ByBitMask enumeration mode.

VisIt's Silo Plugin currently only supports a single Multimeshadj object, and it must exist in the root file @

It also requires an integer variable containing the number of domains @

The full source for this example is located here: mmadj_rect_2d.C

The example creates the following files: 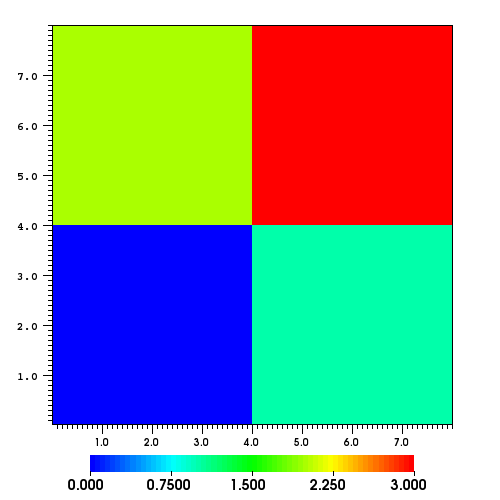 Change the centering of the Pseudocolor plot to "nodal" & you should see blending across the domains: 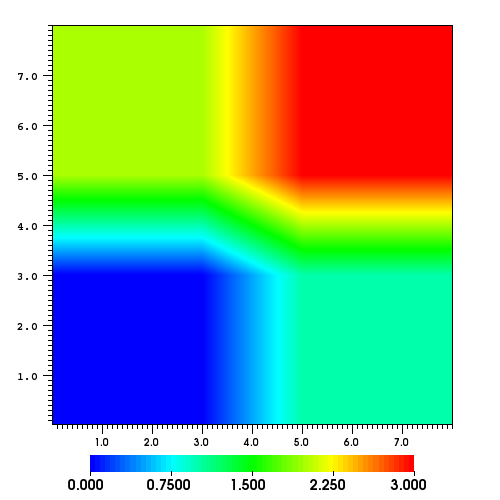 You can also use the inverse ghost zone operator to view the generated ghost zones: 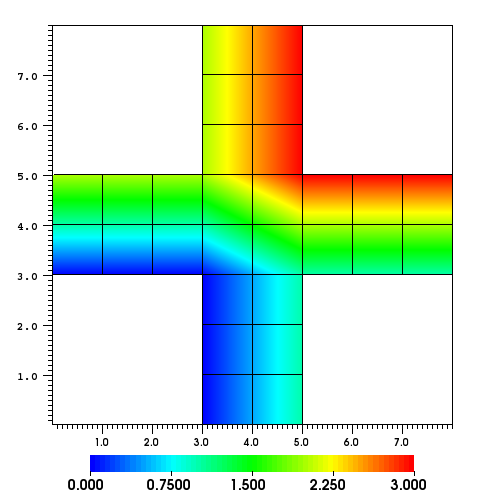