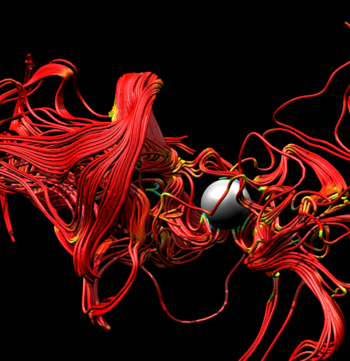 The integral curve operator attributes have been divided into three tabs within the dialog box: Integration, Appearance, and Advanced.

The user can seed the integral curves using a single point, an arbitrary list of points, or samples on a line, plane, circle, sphere, or box.

For samples taken from a line, circle, plane, sphere or box, there is an option to generate uniform or random samples from the specified region.

Samples from a circle, plane, sphere or box can be either taken from the boundary, or the interior. For example, in the case of a plane sampling source, the samples can either lie along the edges of the planar region, or within the bounded rectangle, as shown below. 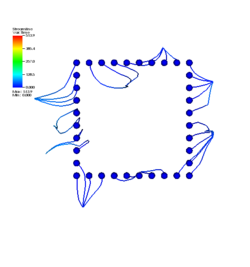 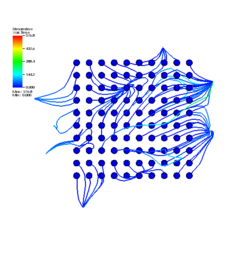 Integral curve termination can be controlled in several different ways. The termination is based on the most conservative criteria, that is only one criteria must be met for termination.

The appearance tab specifies how the integral curve will be drawn.

Allows the user to remove points along the integral curve according to difference schemes.

Note: if displaying integral curves using tubes or ribbon regardless of the cleanup setting vtkCleanPolyData will be called. Tubes and ribbons can not contain duplicate points.

Crop the integral Curve (for animations)

Integral curves can be cropped so that they appear to grow over time. This option is useful for creating animation via a python script.

See Streamlines vs Pathlines attributes common to all PICS operators.