In recent years, support in VisIt has grown greatly in the areas of atomic and molecular visualization and analysis. This comes in the form of internal data model support, new plots and operators, new and upgraded analysis features, a basic understanding of atomic characteristics, and a variety of file format readers.

The Molecule plot takes as input data with atoms and bonds (stored internally as Vertices and Lines in a VTK PolyData structure) and renders it as spheres and lines/cylinders.

In the above image, you see the attributes window for the CreateBonds operator. The options are:

Other Plots and Operators

The following images show plots and operators you might use to explore your data apart from the Molecule plot and related operators. These examples show charge density and force vectors associated with the raw molecular positions and species, all combined in the same window as a Molecule plot.

In this image, the charge density grid is shown using the Pseudocolor Plot, with moderate transparency, after applying the ThreeSlice operator to the grid around a point near the center of the molecule. 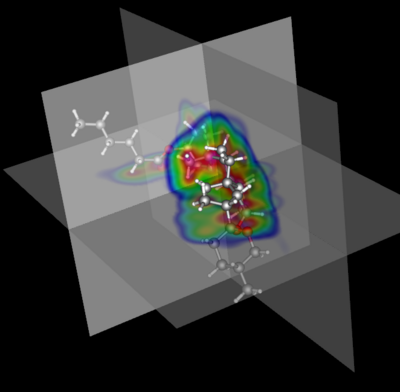 In this image, a Contour plot has been applied the charge density grid, with a single low-density value, and some transparency so that the molecule itself is still visible. Note that if you have more than one variable on your grid, for more flexibility you might choose to use the Isosurface operator over one variable and color using the Pseudocolor plot on a second variable. 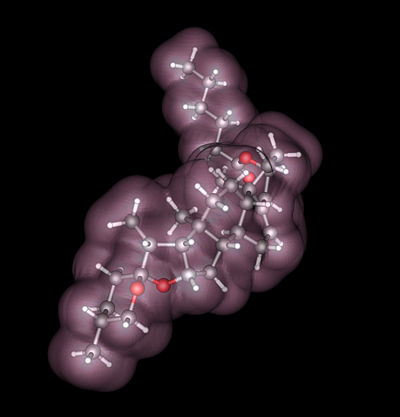 Volume Plot of the 3D Grid

This shows a Volume plot of charge density. Note that the Volume plot has a continuously adjustable opacity and by nature allows farther parts of the data to show through to the front, allowing the whole data set to be involved in the final picture. 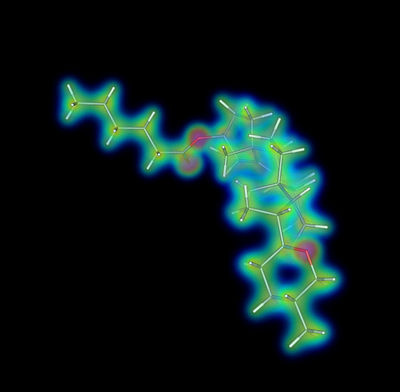 Isocontour Lines on a Slice

Here, we used the Contour plot on a slice through the data, with a thicker line width, and a continuous color table to show the increasing charge density. 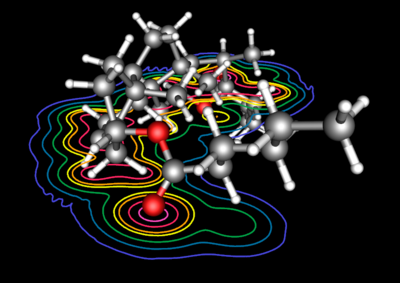 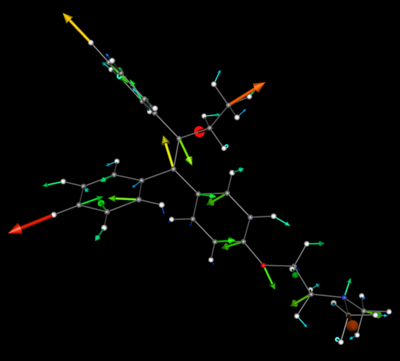 Numeric expressions, created in VisIt's Expressions window, are compatible with molecular data types. For example, if one created the variable "xcoord" as a Scalar, defined as "coords(mesh)[2]" (where "mesh" is the name of the mesh in your data file containing the atomic data), then it will create a new value, centered at the atoms, of the value of the Z coordinate of the atoms.

One useful expression for some molecular data files is the "enumerate" expression. The most common use case is if your data file contains only a species type index, such as {0, 1, 2, etc.}, but does not have support for mapping this index to an actual atomic number. In this case, some molecular operations in VisIt, which require an atomic number (often called "element"), will not work. In this case, you can use the "enumerate" function to map, e.g. "0" to "14" (Si), "1" to "80" (Hg), etc. Typically you want to call this new scalar variable "element" as this is the convention VisIt follows by default for this variable (though in some plots/operators you can specify a different one).

For example, the LAMMPS readers and VASP POSCAR reader do not have intrinsic knowledge of which type of atom in the file maps to which atomic number -- but they do report the atom type (0,1,2...) as a variable called "species". To enable the VisIt features which use atomic number, define a new expression, called "element", of type "Scalar Mesh Variable", with the definition "enumerate(species, [14,80,8])", which maps the first type to Si, the second to Hg, and the third to O.

Most plots have a number of options which can increase their quality at the cost of performance. Some examples follow.

The first example, on the left (before) vs. on the right (after), shows what increasing the atom and bond rendering quality can do in the Molecule plot.

This second example, left (before) vs. right (after), shows what using cylinders for stems, and higher polygon count vector heads, does for the Vector plot.

This example shows the same plot before and after modifying various annotation properties, such as:

VisIt has the ability to save windows, not just as image formats like PNG and JPEG, but as data files which can be imported into other tools. Some of these data types can be imported back into visit or other visualization and rendering tools which might have different rendering features of interest for making renderings.

One of the exportable data file types in VisIt, after composing your plots in VisIt, is a set of POV-Ray scene description files, which are commented and composed in a manner intended to be tweakable by users to achieve results better than what one could get with a real-time rendering tool. See below for an example.

VisIt contains readers for over 100 different scientific, code-specific, and other general file formats. Below are listed several of the most specific to molecular data.

Note that many of these formats have lax restrictions on naming, and VisIt may not automatically detect the file type. To force visit to try your desired file reader (as listed in quotation marks in the section header below), use that reader's name as the input to the "-assume_format" command when launching visit. For example, "visit -assume_format CTRL" will try the LMTO CTRL reader before reverting to its automatic detection code, and "visit -assume_format LAMMPS" will try the two LAMMPS readers first.

The VASP code (http://cms.mpi.univie.ac.at/vasp/), as described in the link, is "a package for performing ab-initio quantum-mechanical molecular dynamics (MD) using pseudopotentials and a plane wave basis set." Its output is ASCII text in several files, and the VASP reader in visit supports "OUTCAR" and "POSCAR" for varieties of atomic positions and variables, and "CHGCAR" for charge density grids.

Since the charge density grids can get very large, the VisIt CHGCAR reader is actually parallelized to help speed the ASCII-binary conversion process on multi-node machines when using the MPI-enabled version of VisIt's computation engine. It will decompose the grid into as many domains as you have processors, and each will read and process its chunk of data. Since this is an ASCII format, the speedup for the I/O portion will not scale to large numbers of processors, but the decomposition will also help the rest of the pipeline scale in parallel for other compute-intensive operations.

The first is the output dump file in Atom style, usually ending in ".dump". Here's a small example of that format with three variables per atom (the final three columns):

In this example, the second and fourth atoms are of the first species type, and the first, third, and fifth are of a second species. So you'll need to create an enumerate expression to create the atomic numbers needed for various molecular operations. For example, create a variable called "element", of type Scalar Mesh Variable, and define it as "enumerate(species, [1, 8])" -- this maps the first species to hydrogen, and the second to oxygen.

Note that the LAMMPS Atom-style dump has changed: the ITEM line with ATOMS now specifies the columns which were be written out. To continue supporting the old atom-style dump format, the reader assumes a format string of "id type x y z" (i.e. unscaled atom coordinates) if the line only contains the word "ATOM" with no format specified. The new default is "id type xs ys zs" (scaled atom coordinates) for the updated format. See the LAMMPS documentation of the "dump" command for details.

The second format is the input format used for the LAMMPS "read_data" command. Its file extension is not standardized, but can sometimes be ".eam", ".meam", and ".rigid".

(As an aside, note that there is a "proper" EAM file containing pair potentials. Though the "EAM" refers to the embedded atom potential method in both usages, these are different files.)

The Protein Data Bank (PDB) archive, at http://www.rcsb.org/, contains molecular files in a standard ASCII format. The format, however, is used for a wide range of molecular data, not just proteins. See http://www.wwpdb.org/docs.html for a full description of the file format. This PDB reader support ATOM, HETATM, HETNAM, MODEL/ENDMDL, TITLE, SOURCE, CONECT, and COMPND directives.

This is a simple example of a 2-compound, 4-element type data file with a single model.

Note that the first line lists the number of atoms, the second is a comment (or blank), and the third starts the data. In each data line, there is the element name, then the X, Y, and Z coordinates. Note that you may have several variables after the Z coordinate -- VisIt will allow up to 6 extra variables. Below is an example with three extra variables, which will be called "var0" through "var2" inside visit, and can be combined into vectors or included in any other plotting or analysis operation VisIt supports.

To support multiple timesteps in a single file, simply concatenate each timestep at the end of the previous one, with no blank lines or other separators. Starting with version 1.12, the VisIt XYZ reader also supports atomic numbers instead of element symbols in the first column and also supports the rather dissimilar CrystalMaker flavor of .xyz file (which we don't describe here).

Wikipedia has a page on the format here: http://en.wikipedia.org/wiki/XYZ_file_format, though it does not mention the possibility of extra variables or multiple timesteps, both of which are supported by VisIt.

The VTK file format is well-understood by VisIt, as it is the underlying low-level data model for many of its internal data types. The VTK structure best used for molecular data is that of a "vtkPolyData" type, where the vertices are the atoms, lines are the bonds (if desired), and fields on the atoms are point data fields. An example of an approximate of a water molecule in the ASCII VTK file format is shown below:

If you have no bonds in the file, or would prefer to use the "CreateBonds" operator to generate them inside visit, simply drop the three lines of text in the "LINES" section of the file. For more detailed information about the VTK formats, see http://www.vtk.org/VTK/img/file-formats.pdf. Note that what are called the "Legacy" formats are both simpler and may be more widely supported than the more recent, and complex, XML formats.