GDB stands for GNU Project Debugger (GDB home) and gdb is installed on many Linux (and other OS's) platforms in conjunction with the gcc compiler. Due to its wide availability (it's free) on Linux and other platforms, using gdb to debug VisIt is a good option.

For most programs, it is sufficient to just run gdb program at the command prompt to load a program into gdb and then a simple run command would start the program. VisIt is composed of several components that talk to one another over sockets and those components use shared libraries, whose LD_LIBRARY_PATH is set up by the visit script that launches the various components. In order to simplify launching of VisIt components under gdb, VisIt's launcher script has been enhanced over the years to support launching of VisIt components under gdb such that all of the requisite environment variables are properly set up without the VisIt developer having to know a lot of extra witchcraft.

Note -- In order to run VisIt under gdb, you must have built VisIt from source yourself because all debugging symbols are removed from the binary VisIt distributions.

VisIt's launch script takes care of the extra tedium of running under GDB by setting up environment variables, telling GDB where to find the VisIt source code, etc. See the table below for the arguments.

Example: Run the gui and break when the code enters the QvisGUIApplication constructor, which lets us stop before we initialize the GUI's most important object.

GDB is a command line tool so you will need to know at least a handful of commands to get by. Often using the first letter of a command is enough to identify the command to gdb.

This section provides a little more concrete examples for how to debug certain common cases in gdb.

A VisIt component is crashing

It can be very frustrating when one of your changes causes one of VisIt's components to crash. Generally, when a VisIt component crashes, you will be notified which one crashed either in a window or in a message on the command line. Of course, if you are running with "-debug 5" command line arguments then you will have a set of debug logs to check. Depending on the nature of the crash, the debug logs of the failed component will often contain signal handling information related to the crash such as SEGV for a segmentation violation, which happens with bad pointers.

Once you have determined the failed component, run it inside of the GDB debugger using VisIt's gdb command line arguments. Example: the viewer is crashing...

If your database plugin is crashing the mdserver or the compute engine then you can probably just debug as you would for any VisIt component that is crashing (described above). However, if your plugin is not returning the right data or if it is not reading your file correctly then you may want to step through it using gdb. As was mentinoed before, it is not generally possible to set breakpoints for plugin method names until the plugins are actually loaded. Plugins are loaded at different times on the mdserver and the compute engine. This means that you'll have to employ slightly a different technique for each.

The mdserver does not call all database plugin methods. Typically, you can bet that many of them will be called except for the GetMesh, GetVar, GetVectorVar methods. Common errors are in the database plugin constructor and the PopulateDatabaseMetaData method.

In the compute engine

The compute engine calls all database plugin methods at one time or another.

Simulations that crash can often be debugged by attaching with a debugger. However, that is not possible sometimes if the simulation crashes soon after startup or during startup. To deal with that situation, you can run the simulation in gdb, spawned by MPI. This way, the offending rank will be caught in one of the xterm windows and you can get a stack trace. 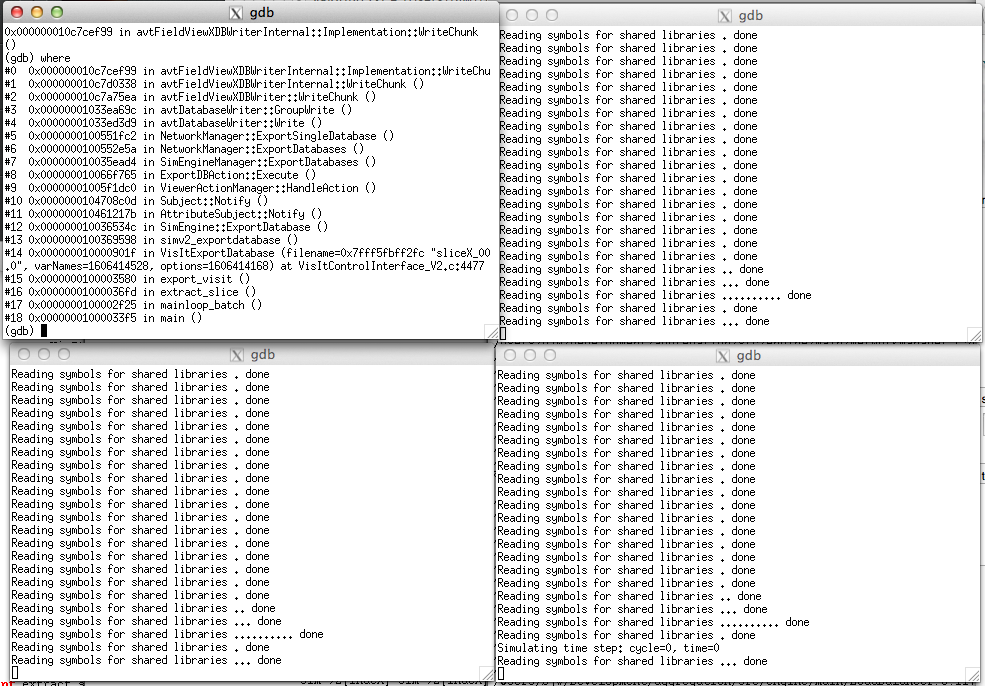